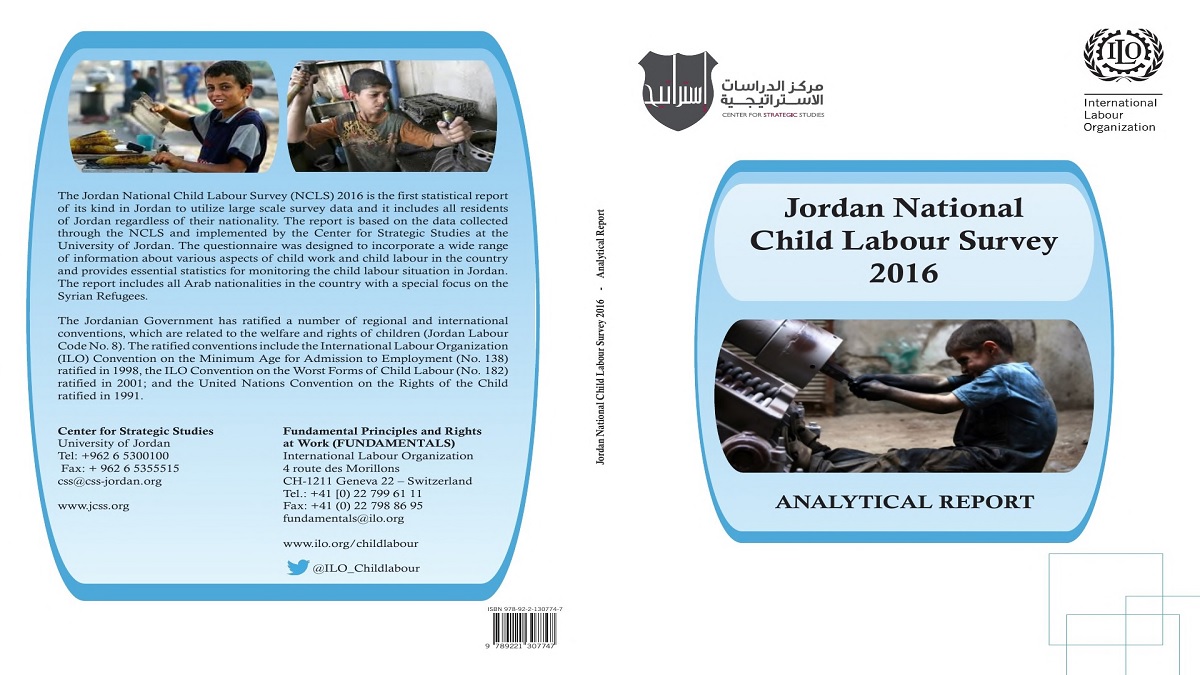 The Jordan National Child Labour Survey 2016 is the first statistical report of its kind in Jordan to utilize large scale survey data and it includes all residents of Jordan regardless of their nationality. The report is based on the data collected through the NCLS and implemented by the Center for Strategic Studies at the University of Jordan. The questionnaire was designed to incorporate a wide range of information about various aspects of child work and child labour in the country and provides essential statistics for monitoring the child labour situation in Jordan. The report includes all Arab nationalities in the country with a special focus on the Syrian Refugees.

The Employment and Labour Relations Act further states that no child shall be employed in any situation that is harmful to health, dangerous, or other unsuitable activities. The International Labour Organization (ILO) defines child labour as “work that deprives children of their childhood, their potential and their dignity, and that is harmful to their physical and mental development”. Poverty is one of the reasons for child labour; it drives many children into premature employment. Children who lack financial and other support from their parents or guardians and those abused at home are more likely to engage in child labour.

This report provides a wealth of valuable statistical information on demographic and socio-economic characteristics of working children aged 5–17 years as well as some related information about the households to which they belong. The report also contains survey findings about children’s non-economic activities, such as their attending school and engagement in household chores. Generally, all estimates and classifications of the working children and child labour are aligned to the international statistical measurement standards adopted at the 18th International Conference of Labour Statisticians (18th ICLS).

This project is a collaborative effort and I would like to express my sincere thanks to the International Labour Organization (Mr. Insaf Nizam and Mr. Bijoy Raychaudhuri) for providing financial and technical support through the project and in the preparation of this report. I would also like to commend the Department of Statistics (Dr. Qasem Alzoubi) for providing the national sample, and Ministry of Labour (Mr. Hamada Abo Njmeh) for their cooperation with CSS in this endeavor.

I wish also to extend my sincere gratitude to various groups of participants for their efforts, which contributed to the production of this report.

Many thanks also to the Steering Committee for their support and guidance throughout the implementation of the project. Gratitude is also extended to the technical committee for their insight throughout the various stages of the project. The CSS Research team was composed of Prof. Musa Shteiwi (Team leader), and Dr. Walid Al-khatib, Mr. Ahmad SaadEdeen, and Miss. Islam Bashayreh. Many thanks to their efforts and dedication.

Finally, I would like to thank all respondents who agreed to spare their time for the interviews and to provide useful information that has enabled CSS to obtain the required information.