Public Opinion Poll on Current Issues Terrorism: The Aftermath of the Killing of Al-Zarkawi 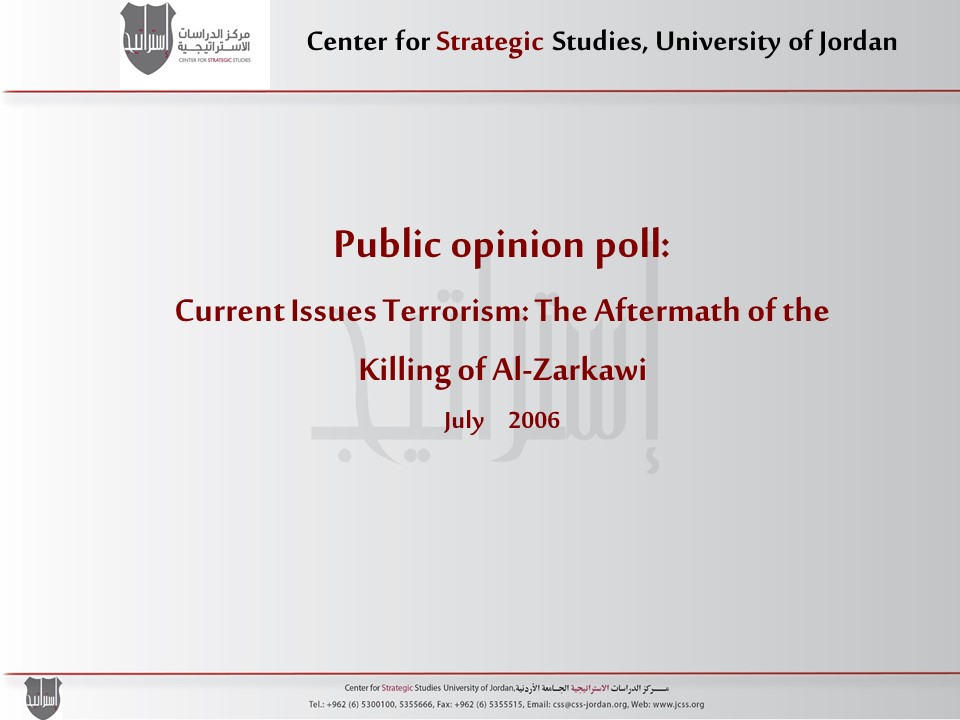 The Centre for Strategic Studies (CSS), continues in its effort to monitor and measure Jordanian public opinion and inclinations regarding current political affairs and issues that effect Jordan and the region, particularly issues that effect Jordanian society. Towards this goal, the CSS conducted a public opinion poll to measure the impact of the killing of Abu Musa’ab Al-Zarkawi, who led the Al-Qaeda in Bilad Al Rafedien (Iraq), until his death. His death was followed by a controversial visit, by four Jordanian Parliamentarians, who represent The Islamic Action Front. The purpose of the MP’s visit was to pay their condolences on the passing-away of Al Zarkawi at his home in city of Zarka.  This public opinion poll was conducted during the period June, 18-23, 2006.  Two samples were designed and selected: The ‘National Sample’ and the ‘Public Opinion Leaders Sample”. The completed number of interviews for the national sample was 1104 respondents. The national sample was designed according to a stratified, multi-stage, cluster design methodology to ensure accurate representation of the Jordanian population.

This report comes in ‘Four’ parts. The first part aims at identifying citizens’ opinion on whether they consider certain organizations (Hamas, Hezbollah, Al-Qaeda in Bilad Al-Rafedien , under the leadership of Abu Musa’ab Al-Zarkawi, and Al-Qaeda’, under the leadership of Osama Bin Laden) as “legitimate resistance organizations’ or ‘terrorist organizations’. Also, this part compares the results of this poll to previous polls conducted in 2004 and 2005 addressing the same issue.

The second part of this report aims at identifying citizens’ opinion on whether they consider operations conducted by various organizations, armies, or states as terrorist operations or not. The report will also compare this poll’s results with the 2005 and 2004 surveys conducted on the same questions raised in this poll. The purpose of this methodology, which aims at identifying citizens’ positions, through asking about organizations and operations, is to reach a definition of terrorism based on how Jordanians perceive and define terrorism without imposing a definition on them.

The third part of this report addresses citizens’ reactions to the killing of Abu Musa’ab Al-Zarkawi. By asking their personal reaction to the news of the death of Zarkawi, and asking about the reasons behind this personal reaction.

The fourth part measures citizens & opinion leaders’ inclinations towards the four Islamic Action Front parliamentarians visit to the house of Al-Zarkawi, to pay their condolences, from the political, social and religious perspectives.