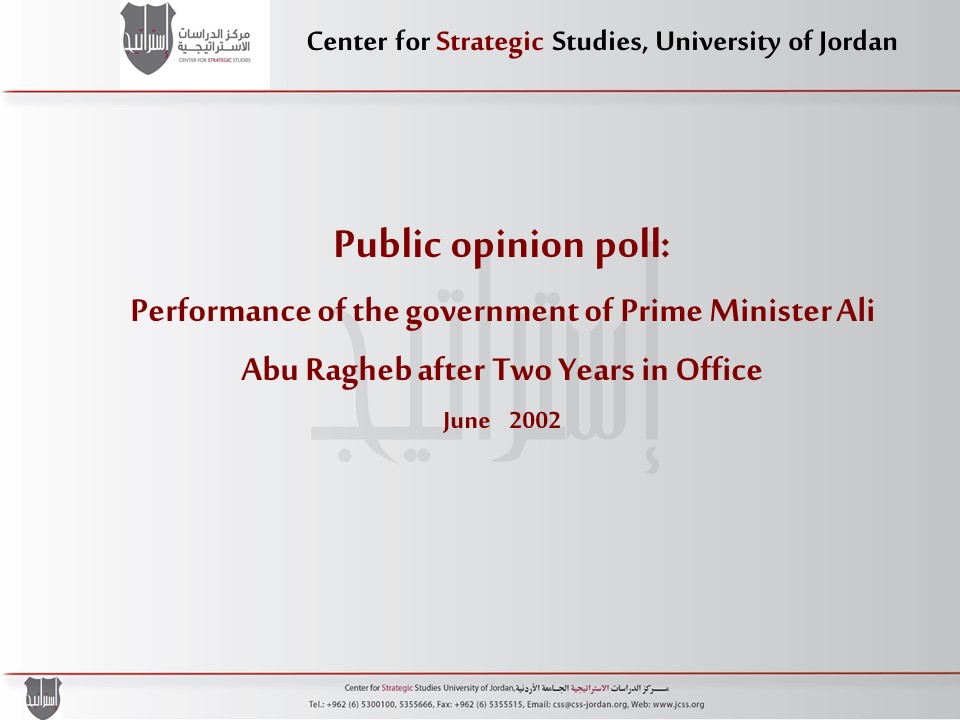 The Center for Strategic Studies (CSS) of the University of Jordan is pleased to present the main findings of an opinion poll on the performance of the Government of Engineer Ali Abu Ragheb after two years in office (the Government was formed on 9 June 2000. The CSS carried out the poll inside the Hashemite Kingdom of Jordan during the period 15–21 June 2002 on two standard statistical samples as follows:

On this occasion, the CSS is pleased to extend its thanks to all the organizations, which contributed to the success of this poll, as well as all the respondents in both samples, who provided valuable data. Thanks, are also due to all respondents inside and outside the University of Jordan, who helped rendering success to our endeavor.

The CSS hopes that the findings of this poll would be useful to all those who are interested in the issues addressed therein. Researchers, who wish to obtain further in-depth analysis, may use the detailed data available at the CSS.

The significance of the current poll stems from the fact that it falls in the context of the previous polls. Accordingly, the results are qualified for measuring public opinion attitudes vis-à-vis the ability of the Prime Minister and his ministerial team to shoulder their responsibilities. The findings of the current survey are also eligible, when compared with the findings of the previous polls, for monitoring developments in this respect.

This poll sought to investigate the citizens’ attitudes towards the Government’s performance vis-à-vis a number of social, political, economic and administrative issues. These issues are related to the foreign debt burden, poverty and unemployment, corruption and public freedoms. The poll, however, intended to focus on evaluating citizens’ appraisal of certain Governmental procedures. Thus, the respondents were canvassed about the extent of success of the Government’s foreign policy (in general). This survey also included the respondents’ opinions on the success of the Government in attracting more local, Arab and foreign investments, developing the Aqaba region, promoting small enterprises and laying down feasible plans for the development of the governorates.