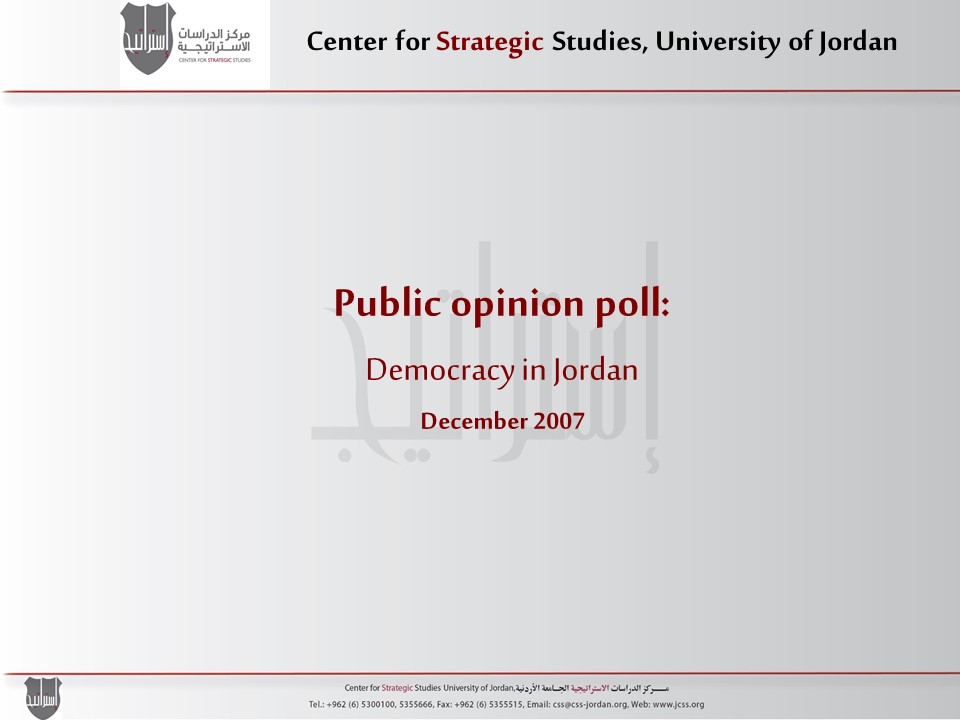 The Center for Strategic Studies at the University of Jordan conducted an opinion poll about democracy in Jordan during the period Nov. 29 – Dec. 4, 2007.  This is the 14th annual poll that the Center has executed as part of the study of democratic transformation in Jordan.  The size of the completed poll sample was 1,133 respondents aged 18 and above, while 67 individuals declined to take part in the poll, making the participation rate  94% and the rejection rate 6%.  This poll aims to identify the views of Jordanians about the democratic transformation in Jordan.  It measures the level of democracy as perceived by citizens, identifies what democracy means to Jordanians, what type of political system Jordanians prefer, and what political system they perceive as the best to address the issues of poverty, unemployment, and financial and administrative corruption.  Additionally, the poll gauges the degree to which public freedoms are guaranteed and explores the factors that pose the largest obstacles to democracy in Jordan.  The role of the political parties and the extent of their popularity are also assessed.  Furthermore, the poll tackles the extent of participation in the 15th parliamentary elections, and the political orientations for which citizens voted. The poll also evaluates the integrity of the 15th parliamentary elections at the national and electoral district levels.  The extent to which people thought the 15th parliamentary elections were free and fair is compared to the 14th parliamentary election and to the municipal elections which were held on July 31, 2007.  The poll also addresses audio-visual media and the degree of people’s trust in it with regard to local, Arab and international political news.  The most important results of the poll are presented below.