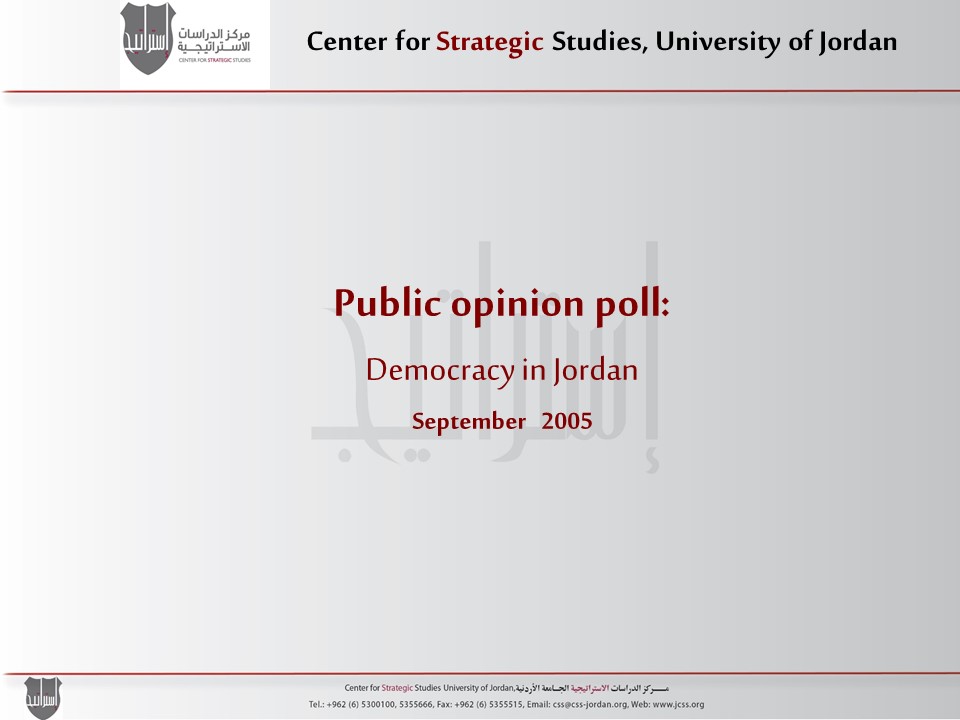 The Center for Strategic Studies at the University of Jordan conducted an opinion poll on democracy in Jordan in the period 26/8/2005 to 1/9/2005. This is the twelfth annual poll carried out by the Center as part of a study on democratic transformation in Jordan. The size of the completed poll sample totaled 1385 respondents 18 years of age and over. The polling project aims to track the opinions of Jordanian citizens on the democratic transformation in general. It includes measuring the level of democracy as perceived by citizens, what democracy means to Jordanians, and what kind of political system Jordanians prefer. Additionally, the degree of guarantee of public freedoms and the extent of the prevalence of justice and equality in Jordan were measured. The role of the political parties and their popularity was measured. The poll also evaluated the performance of the current parliament in drafting laws to address problems of unemployment, poverty, corruption, price hikes, and the guarantee of public freedoms. The specific performance of the electoral constituency MPs was measured, as well as the extent of their communication with the voters. Among the important topics addressed by the poll was the issue of priorities among Jordanians: Are they external or internal? Political or economic? The importance of this topic arises from the fact that it has occupied a sizeable area of dialogue in Jordan in recent years. The poll also included a measurement of the degree of citizen participation in various civil society institutions. The poll addressed broadcast media and the extent of people’s trust in it with regard to local, Arab and international political news. The most important results of the poll will be presented below.