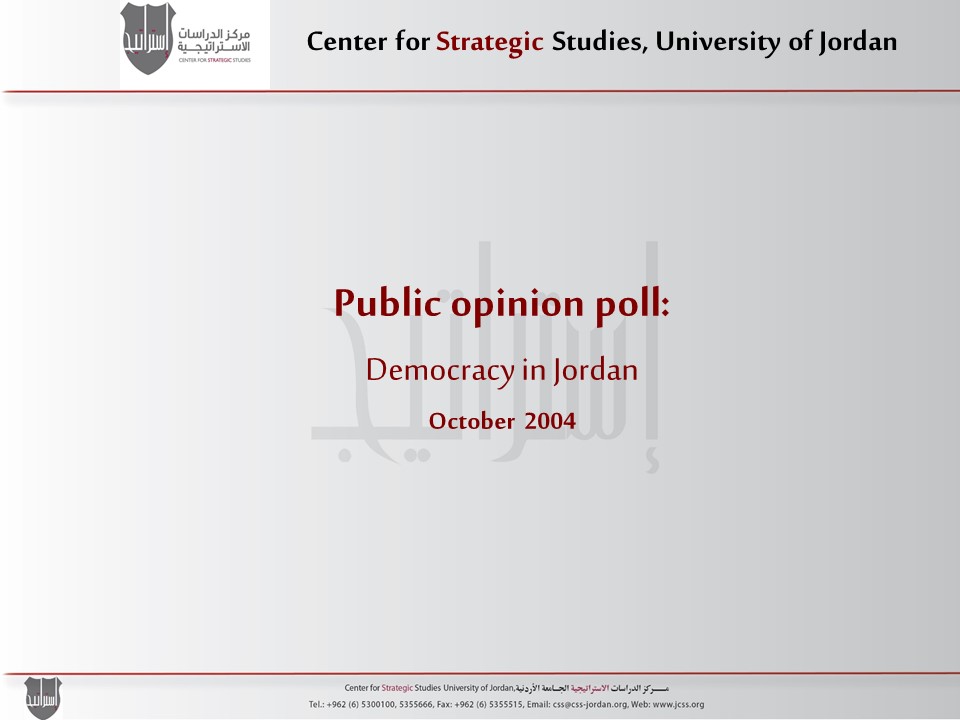 The Center for Strategic Studies at the University of Jordan conducted a poll on democracy in Jordan during the period from 30/9/2004 to 6/10/2004. This poll is the eleventh annual poll conducted by the Center as part of a study on democratic transformation in Jordan. The sample totaled 1,386 respondents 18 years of age and over. The poll aimed at identifying the opinions of Jordanian citizens on democratic transformation in Jordan generally. This included measuring the level of democracy as perceived by the citizens, what democracy means to Jordanians and the form of political system desired by Jordanians. Additionally, the poll measured the degree to which public freedoms are seen as guaranteed and the extent of the spread of justice and equality in Jordan. The role of political parties and their popularity were evaluated as well. Moreover, the poll included an evaluation of the performance of the current parliament in creating laws to deal with the problems of unemployment, poverty, corruption, price increases and the safeguarding of public freedoms. The role of constituency representatives in parliament (MPs) was also evaluated, and specifically, their interaction with the voters. Among the most important topics of the poll was the issue of priorities of Jordanians: Are they external or internal? Political or economic? The importance of this topic is rooted in the fact that it has dominated public debate in Jordan in the last few years. The poll also covered the subject of political development in terms of how aware the respondents were of the plan declared by the government and what the plan will lead to. The poll covered broadcast media and the amount of trust held in its in relation to local, Arab and international news. The most important results of the poll are presented in the following report.