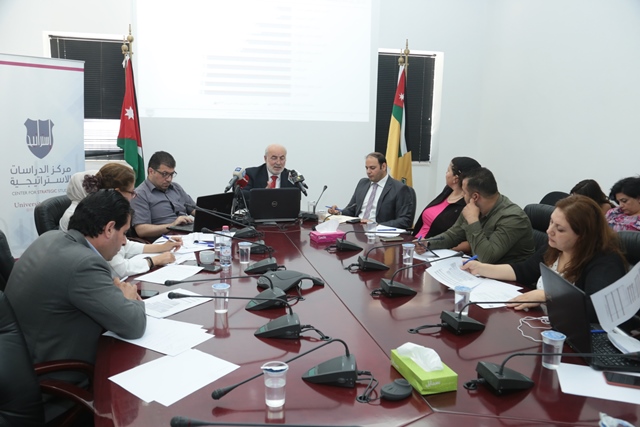 Over 35 per cent of Jordanians and 44 per cent of opinion leaders believe that the overall situation in Jordan is going in the right direction, an opinion poll revealed on Wednesday.

The poll, conducted by the University of Jordan’s Centre for Strategic Studies (CSS) on Jordanians’ trust in Prime Minister Omar Razzaz’s government a year after its formation and current challenges, surveyed 1,800 Jordanians aged over 18 and a smaller group of 700 “opinion leaders”, including academics, intellectuals, media and businesspeople and politicians.

“The 58 per cent of respondents who believe that things are going in the wrong direction in Jordan attribute [their] stance to the bad economic situation, financial and administrative corruption, unemployment and wasta [favouritism],” CSS Director Musa Shteiwi said.

Meanwhile, opinion leaders stated that the main reason “things are going in the wrong direction was the absence of reforms and government decisions that are not in favour of its citizens, as well as the difficult economic situation,” Shteiwi told reporters at a press conference held at the CSS.

The surveyed believed that the main problems facing the Kingdom are “unemployment, poverty, a bad economic situation, an increase in prices of commodities and corruption”, according to Shteiwi.

The survey also revealed that Razzaz and his government garnered the second lowest evaluation since 2011, after former prime minister Hani Mulki’s government, according to Shteiwi.

Turning to Razzaz’s performance, 47 per cent of the grassroots sample said he was capable of bearing the current challenges, while the opinion-leader sample was close with 46 per cent, Shteiwi said.

Razzaz’s team also received lower rates of trust among both the grassroots and the opinion-leader samples, with 33 per cent voting that the government team was capable of bearing the responsibilities expected from them, Shteiwi told reporters.

As for the economic situation, Shteiwi added, 77 per cent of the grassroots sample stated that the Jordanian economy is going in the wrong direction, while the opinion leader’s percentage was 75.

“Over 45 of the grassroots and 41 per cent from opinion leaders surveyed expressed optimism that the Jordanian economy would improve in the next two years,” Shteiwi added.

Meanwhile, more than 90 per cent of those surveyed expressed trust in the military and security agencies, while their trust in the Lower House and political parties was as low as 16 per cent and 12 per cent, respectively, Shteiwi said.

“This contrast in numbers between the low trust percentages in the elected, civil and government institutions versus the high trust in the security agencies should be examined carefully by the government,” Shteiwi said.