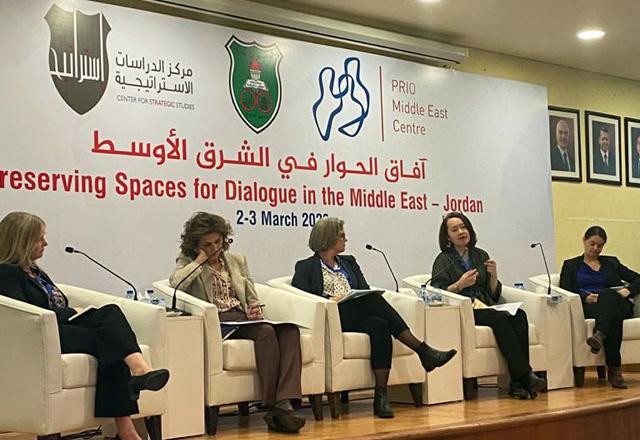 AMMAN — On the occasion of the Norwegian royal visit to Jordan, a two-day seminar titled “Preserving Spaces for Dialogue in the Middle East” that draws attention to gendered dimensions of Preventing Violent Extremism (PVE) and the role of youth in establishing peace and security began on Monday.

The first day of the seminar, which was held at the University of Jordan’s Centre for Strategic Studies (CSS), brought together panellists from Jordan and Norway with the aim of highlighting the two countries’ shared concerns and developing sustainable action points for PVE.

“Jordan and Norway are small states with ambitious foreign policies, but with different geographical locations. Yet, the two countries pursue many of the same aims,” CSS Director Zaid Eyadat said during his introduction.

“Not only are women not recognised for their role as partners of peace — their role in the prevention of radicalisation and promoting resilience often goes unrecorded and unnoticed,” Soreide said.

“Gender stereotypes continue to be barriers to our understandings, preventing us from seeing the realities,” she added.

Jordan and Norway have joined forces to address the “invisibility of women” through the New York-based Group of Friends on PVE, which is co-chaired by both countries and was launched in September of 2017, she noted, highlighting that Jordan and Norway “have made it a place for the voices of both women and men”.

Jordan has “high ambitions” and Norway is pleased to be supporting its national action plan on women, peace and security, the Norwegian minister expressed, adding that researchers from both countries are working together using updated knowledge and relevant policies, with the aim of pushing the agenda forward.

During his address, Maaytah praised the dedicated efforts of both countries, stressing that Jordan has had a “strict political process” and a major role in combatting terrorism, “even before” engaging in the UN’s agenda on women, peace and security.

“In regards to the existence of a plan to fight terrorism and extremism, there is a government committee, led by a minister who follows a national strategy,” Maaytah said.

The number of women leading governing bodies is 17, and these bodies include the Social Security Investment Fund and the Legislation and Opinion Bureau, the minister added.

Given both countries’ mutual concerns in addressing measures to prevent female radicalisation, the role of women in preventing radicalisation and the relationship between violent extremism and women’s safety, the first panel during Monday’s session served as a platform for identifying concrete outcomes.

Speaking as one of the panellists, Salma Nims, secretary general of the Jordanian National Commission for Women, stressed the importance of harnessing women’s potential as active agents of change.

“It is dangerous to look at a woman as a mother whose influence on her children could lead to violent extremism, as it over-burdens women,” she added, expressing that other factors play into youth turning to extremism.

“Normally, when talking about gender, people think of women,” Special Envoy for Women, Peace and Security from the Norwegian Ministry of Foreign Affairs Marita Sorheim-Rensvik said during the panel discussion.

She stressed that the discussion on PVE has led people to speak more about men’s role in the process, which she described as “crucial”.

Sorheim-Rensvik emphasised the need to work “strategically and constructively”, with the aim to both realise women’s potential and understand the cultural and social expectations men face.

Minister of Youth Fares Braizat noted during Monday’s second session that contributions to empowering youth must be accompanied by economic enablement and entrepreneurship.

The Ministry of Youth, he noted, is working to reenergise its 197 youth centres across the Kingdom by ensuring that young people are “fully involved” in mobilising political participation.

One way the ministry will reach this goal is by having youth develop their own alternative policy papers, Braizat said.

The seminar’s second day is scheduled to be held with the participation of King Harald V of Norway at the King Hussein Bin Talal Convention Centre at the Dead Sea, discussing the state of peace and security in the Middle East.