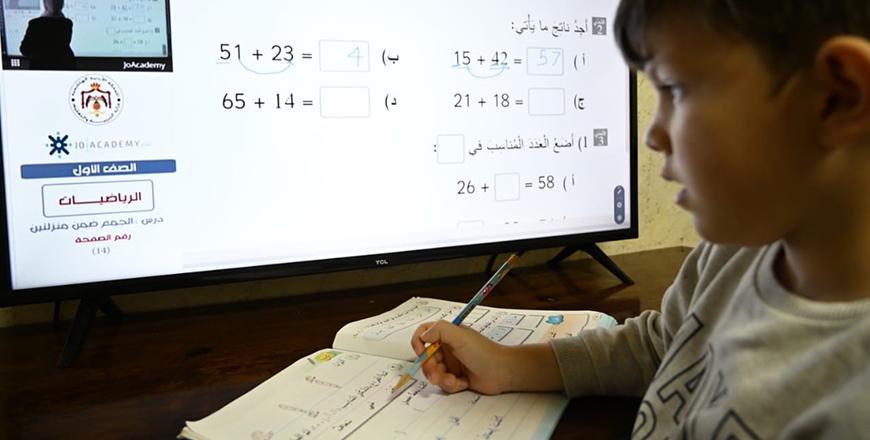 The poll, conducted online by the Department of Public Opinion Polls and Surveys from April 4 to 7 and issued by the Centre for Strategic Studies at the University of Jordan, focused on the learning platforms and TV channels accredited by the Education Ministry for students during the nationwide curfew, the Jordan News Agency, Petra, reported on Wednesday.

According to the Centre for Strategic Studies, the opinion poll surveyed a representative sample of Jordanian students between the  ages of six and 18 who attend schools affiliated with the Education Ministry, from all governorates across the Kingdom.

Included in the “Jordan Street Pulse” poll series, the survey’s results revealed that 80 per cent of the respondents who use the learning platforms and educational TV channels believe that they are “not as good as normal school education”.

Half of the users of the “Darsak” platform have encountered technical problems during the registration process and while interacting with the platform’s online educational content, Petra reported.

About 55 per cent of the students surveyed use the Darsak platform, launched by the Education Ministry, with 61 per cent of these students indicating that they are satisfied with the platform.

The study showed that the majority of respondents, at 72 per cent, are satisfied with teachers’ online performance.

About 52 per cent of the students who responded to the poll said that they use the ministry’s virtual learning platforms and TV channels on a daily basis, while 21 per cent said they access these learning resources every other day.

Regarding student satisfaction with distance learning, 80 per cent of the students said that they are satisfied with online Arabic language courses, while satisfaction with science courses, mathematics and English courses stood at 76, 72 and 54 per cent, respectively.